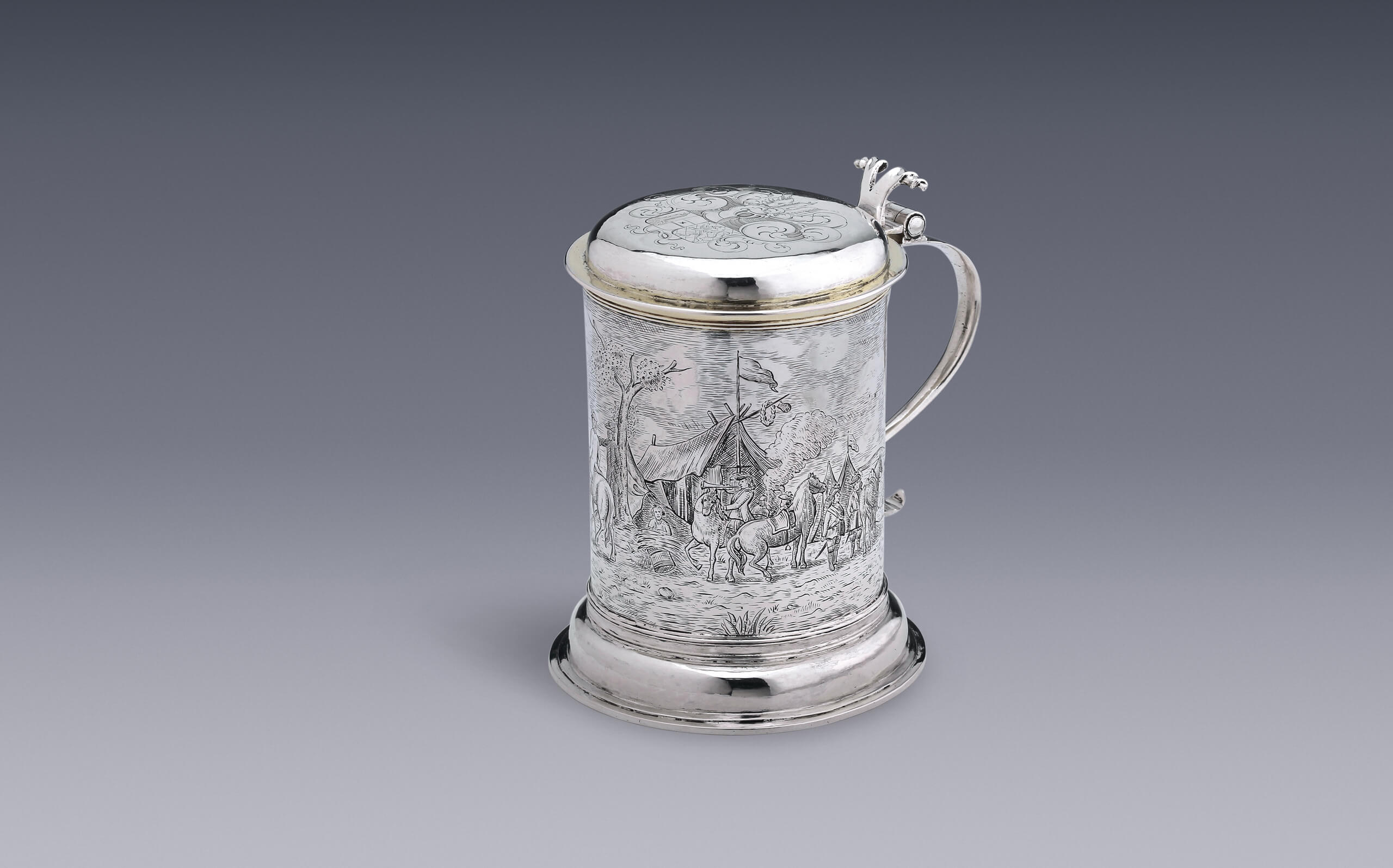 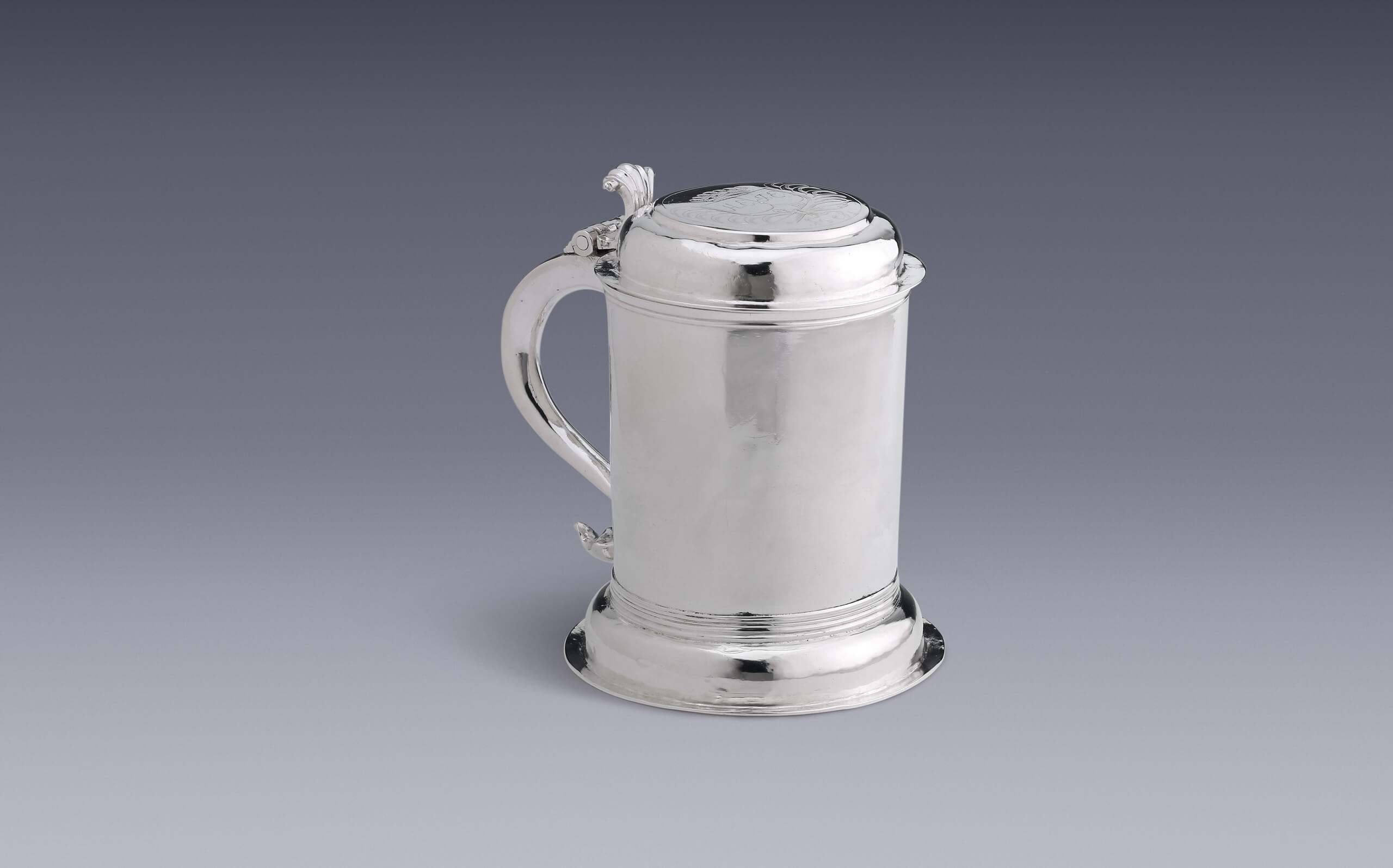 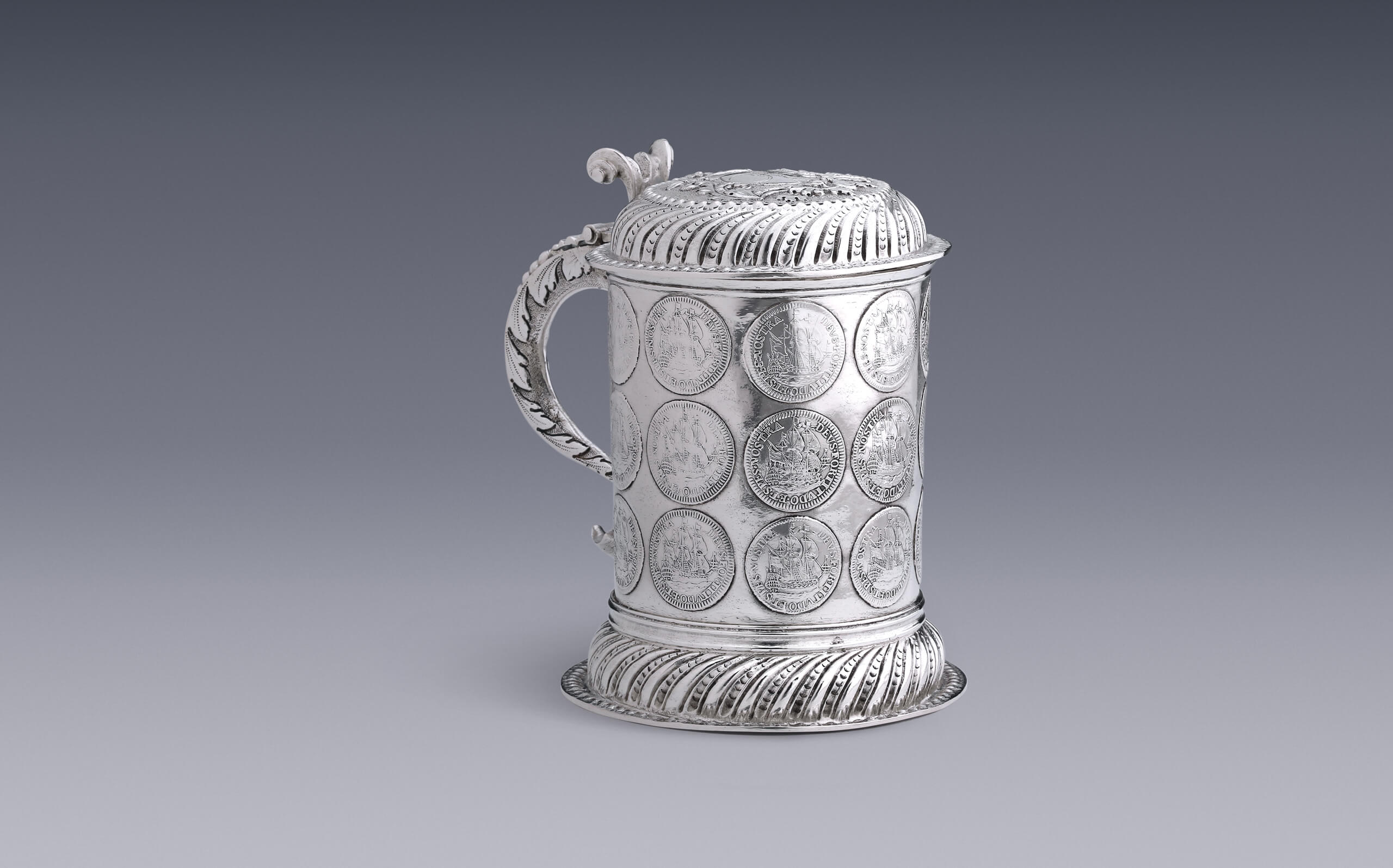 The shape of this delightful trio of small tankards is typical of the Dutch province of Groningen. Groningen silver tankards are rare. In 2011 the Groninger Museum was only aware of thirteen of them. This collection of three is consequently remarkable, while the very different decorations make them extremely interesting from a historical and collecting point of view.

These three tankards all stand on a plain base and have a domed foot. The cylindrical bodies are completely straight. The shape of the foot is repeated in the lid, a plain, flat horizontal band with above it a domed edge with a flat top. The only ornament on the tankards is the thumbpiece. The handle, on which the hinge of the cover is mounted, is completely plain and has an elegant scroll at the end.

These Groningen tankards are described in seventeenth- and eighteenth-century inventories as a pul (beer mug), or Oordspul. This latter name, which is specific to Groningen, is a reference to the volume of the tankard. An Oord is an old Groningen measure of volume equivalent to about 336 ml. The word oord means a quarter. Half and double oordspullen were also made. It’s obvious that they held around 168 and 673 ml. The Groninger Museum holds the original measures for the city weigh-house which can be used to check the content of an Oordspul.

The design of these tankards first appeared in the seventeenth century, when beer was the number one drink of the people. This had to do in part with the poor quality of the drinking water, which was badly polluted, particularly in the towns and cities. Drinking beer was a safe alternative because the fermentation process killed the bacteria. The major difference between these tankards and their modern equivalents is that tankards then were given a lid to prevent dirt and germs from getting into the beer. People believed that epidemics like the plague spread through the air; the lid was supposed to prevent contagion. The tankard would usually be made of stoneware, but there are also examples in glass, earthenware and porcelain with the lid and hinge in metal. Luxurious silver models began to appear in the last quarter of the seventeenth century. Initially the lids were completely flat, but over the years they became higher, creating more room for ornaments; owners could also identify their tankards by having their coats of arms engraved on them.

The oldest of these three tankards was made by Jan de Booser in 1676/77. This is the earliest known Groningen example. De Booser began by making a perfectly plain tankard, which was then engraved with a continuous scene of extraordinarily fine quality.

The siege of Groningen

The image is a scene from the Siege of Groningen during the bombardment by the Bishop of Münster’s army. There are several known prints of this attack such as the one illustrated below.

In the distance is the skyline of the city of Groningen seen from the south with several churches behind the city walls.

In the foreground of the engraving on the tankard there is a busy encampment with various soldiers. Some are on horseback, others stand conversing, holding a horse by the reins, or sit outside their tent. Fires are built and a man astride a horse sounds a trumpet. Soldiers can be seen marching in the background, a cannon is drawn up behind four entrenchment gabions and in the distance is the skyline of the city of Groningen seen from the south, with several churches behind the city walls. This Siege of Groningen was won by the people of Groningen in 1672, four years before the tankard was made.

In the disaster year 1672, the Republic was attacked from all sides: by England, France and the bishoprics of Münster and Cologne. The Bishop of Münster, Christoph Bernard von Galen, nicknamed Bombing Berend, believed he could lay claim to the city of Groningen, where he wanted to convert the Protestants to Catholicism. He marched north with a huge army of 24,000 men. Groningen, however, was well prepared: the city had strong walls and ramparts, and in the build-up to the battle flooded the fields around the city. Enough munitions and rations to withstand a siege were stockpiled in the city. The Groningers swiftly repulsed the first attack near Bourtange: legend has it that the verger of the village of Jipsinghuizen played the Wilhelmus—the Republic’s anthem—on his trumpet so loudly that the Münster army thought they were surrounded by a whole regiment of Dutch troops. They continued to advance, as far as the city of Groningen, where they arrived on 21 July 1672. Bombing Berend entrenched in the village of Deurze and launched the attack from the south. But bomb as he might, the Groningers, supported by people from Drenthe, did not yield. After a siege lasting less than a month, Bombing Berend gave up on 17 August. Other armies were also defeated by the States army, and he retreated with his army, now barely half the original number. On 28 August every year, Bombing Berend is remembered in celebrations of this joyful event.

The lid of this tankard is engraved with arms of alliance of the Berghuijs family, surrounded by an elaborate decoration of ribbons and rocailles with a helm between them.

Jan Fransz de Booser was born in Emden in Germany in 1634 to Frans Johannesz de Booser and his wife Saartje Jans van Laar. They were wealthy Mennonites. In 1658, at the age of twenty-four, he arrived in the city of Groningen and embarked on his career as a journeyman with the silversmith Hendrick Sluijter, where he worked as a die cutter.

He married Susanna Willems Glimmer in 1665, and in 1669 he set himself up as an independent silversmith, while continuing to work as a die cutter for the Provincial mint until 1693. In 1679 he was living in the Akerkhof in a building he called ‘the silver coffee pot’. He married his second wife, Grietien Edzens, in the church in Emden in 1680. He died in Emden on 1 December 1714 at the age of seventy-nine.

In 1679 he was living in the Akerkhof in a building he called ‘the silver coffee pot’.

The undecorated tankard, made by Jan Dronrijp in 1694, is a perfect example of the Groningen tankard. The foot, the body, the lid and the handle are completely plain, doing justice to the tankard’s beautifully balanced proportions. The only decoration is an engraving on the flat round part of the lid, where two escutcheons with the initials HE and IE identify its owners. These are crowned and surrounded with two palms bound together. The date 1695 is engraved below.

Johannes Dronrijp, the son of the silversmith Regnerus Andreas Dronrijp and Ettjen Hillebrants Ardingius, was born in Visvliet around 1660. He was working in Groningen as a master silversmith in 1689, and became a member of the city council in 1699. In 1690 he married Afrelia Treccius in the Dutch Reformed Church in Groningen, and in 1699 he wed Anna Helena Busch, with whom he had two children. He died in 1726 or 1729.

There are twenty-seven ‘scheepjesschellingen’ set in the wall of the tankard.

The most elaborately decorated tankard of the three was made by Willem de Booser in 1716-17. It is basically the same model as Dronrijp’s plain tankard. De Booser chased the foot and the edge of the lid with running or curved ribs. On the flat area of the lid there is a plain escutcheon, framed by chased curling foliar motifs. A tapering beaded strip runs down the back of the handle; the sides are decorated with acanthus leaves against a mat background. The most striking feature is the 27 silver six-stuiver coins—the scheepjesschellingen (ship shillings) of Holland and West Friesland—set in the wall of the tankard.

In 1670 the States of Holland decided to introduce this new ‘ship shilling’ to improve the quality of the coinage after many inferior shillings had got into circulation in previous years. To emphasize the Republic’s status as a maritime power, the new coins bore the image of a warship in full sail and the coins soon became known as ‘ship shillings’. Using silver coins in a silver object adds weight, making it more valuable, and the coins are immediately recognizable to everyone for the guaranteed value they represent. This form of decoration is quite common in German and Scandinavian silver, but much rarer in the Netherlands.

A crowned family coat of arms is applied on the lid. The escutcheon, which is divided in two, contains a tree with a climbing stag and dog against the trunk in the right hand arms, and a half-moon in the arms on the left, which probably belong to the Meinders family. There is another, very similar tankard made in 1711/12 by Willem de Booser, now in the Groninger Museum collection.

Willem Jans de Booser was born in Groningen in 1669; he was the son of the silversmith Jan de Booser, who made the engraved tankard, and his first wife Susanna Willems Glimmer. He was admitted to the Groningen silversmiths’ guild in 1690. In 1693 he married Grietje Torringa, and the couple had five children. He died in 1722.

The origins of beer

After water, beer is the oldest people’s drink in the world. The discovery of beer as we know it is attributed to the Sumerians who lived in ancient Mesopotamia, on the banks of the Tigris and the Euphrates (a region in present-day Iraq and Syria) around 5,500 years ago. They called it ‘liquid bread’, since the primitive beer was probably made from bread. It is thought that the first beer came about by accident, when bread that got wet fermented. Grains are the most important ingredient. They contain nutrients and sugars, which are converted into alcohol by fermentation. People started to add herbs to improve the flavour and the storage life of the beer. Knowledge of beer brewing gradually spread to Africa from Mesopotamia and was introduced into Europe by the Romans.

Children were literally brought up on beer, albeit a light small beer, with just 2% alcohol.

Beer was probably already being brewed in Northern Europe around the beginning of the Common Era. It was primarily a domestic occupation. In the early Middle Ages, specialist brewers began to appear for the first time in monasteries and at court. Monks were very knowledge- able about plants and herbs and made an enormous contribution to improving the quality of beer. It was usually one monk in a monastery, the ciseratore, who brewed the beer. The flavouring for beer was initially a blend of herbs known as gruit, until people started to add hops to beer in the thirteenth century. The use of hops meant that the beer would keep for longer and gave it its characteristic bitter taste.

Beer drinking in the Netherlands

In the Netherlands, beer was the main everyday drink of the people until the mid-eighteenth century. Everyone drank it, young and old, rich and poor, and it was drunk all day long: a meal without beer was unthinkable. Children were literally brought up on beer, albeit a light small beer, the beer of the common man, with just 2% alcohol. Those who could afford it drank a stronger beer with their evening meal. The consumption of beer was vast. It is estimated that the population drank an average of 280 to 400 litres of beer per head every year-around four or five times as much as today.

The tankards are all marked on the underside with the city mark and date letter for Groningen and the maker’s mark.

Groningen 4/R, 4th alphabet, the letter R for 1694-95 and the maker’s mark ID for Johannes Dronrijp. 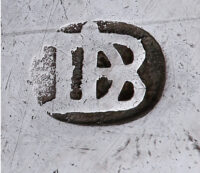 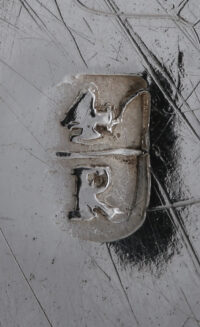 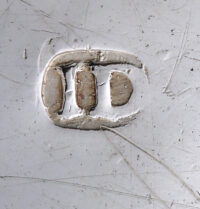 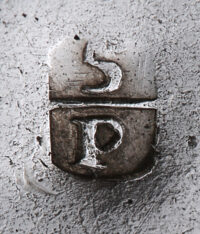 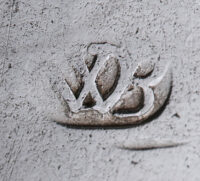