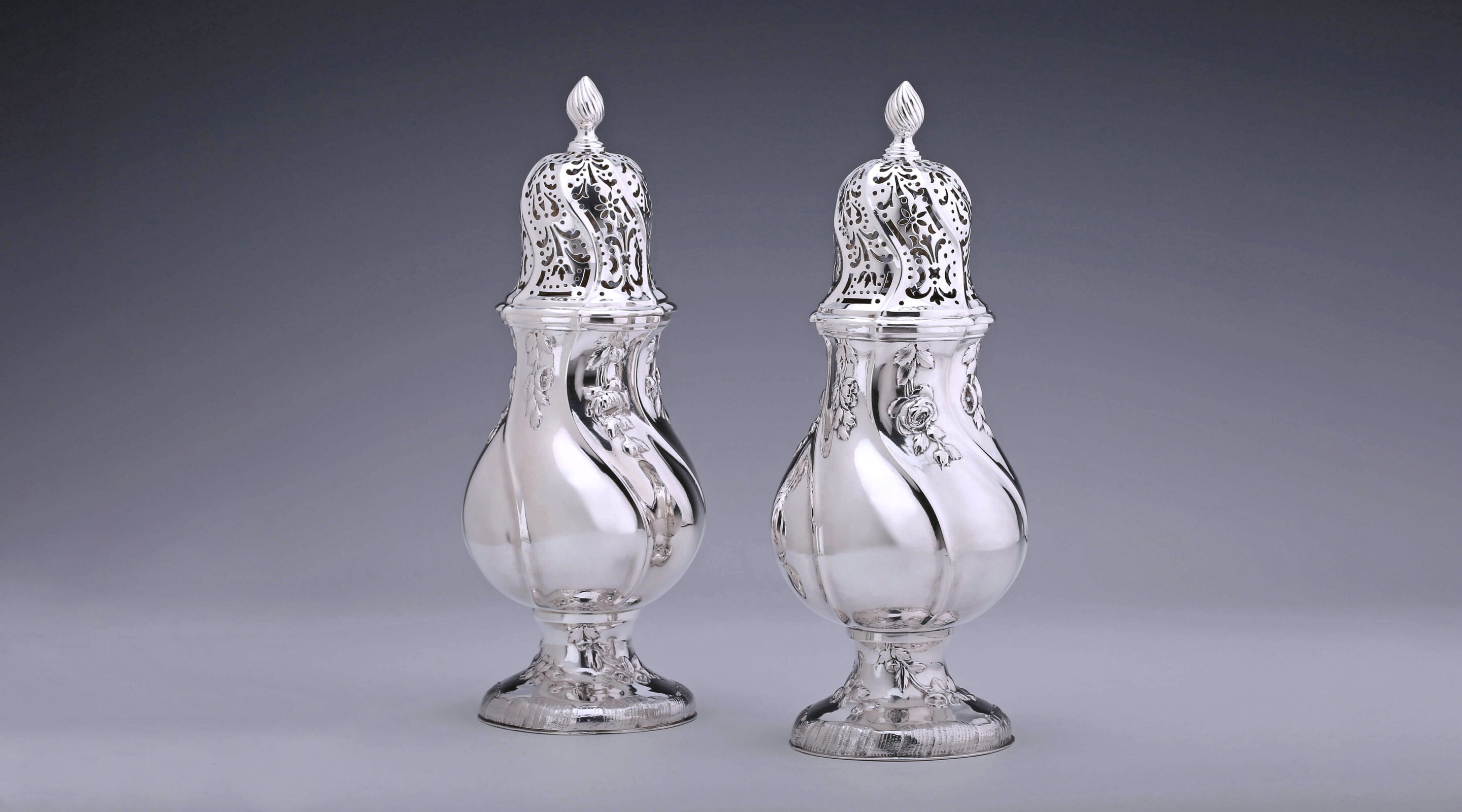 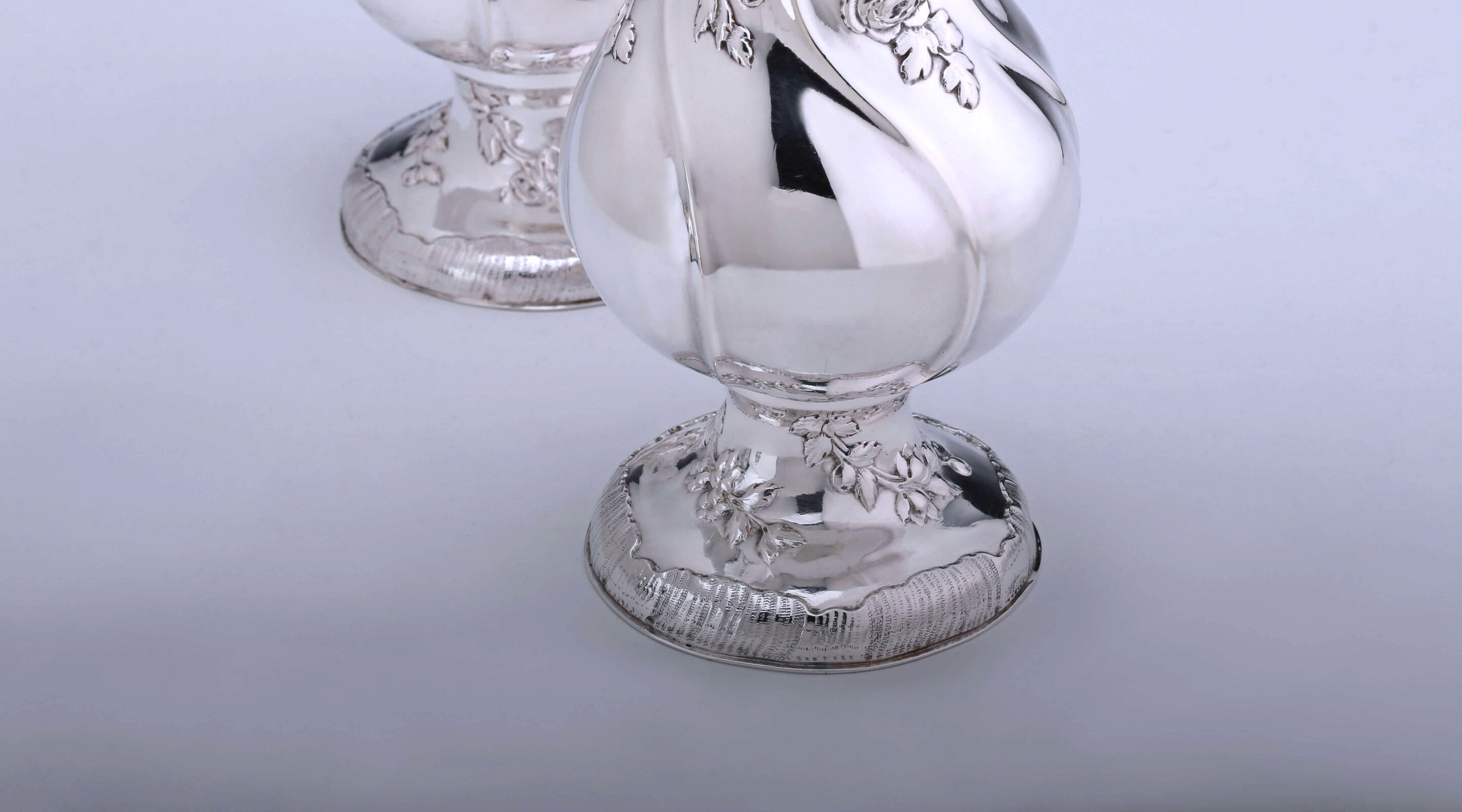 A Pair of Rococo Casters

These impressive Louis XV-style silver casters are among the largest of their kind ever made in the Netherlands. The round foot has a matted rocaille or so called "foam collar" decoration around the base. Above it are twisted, chased floral sprigs. The plain baluster-shaped body is divided with spiraling vertical lines with chased floral twigs which hang down from the upper rim. The chased vertical lines continue into the pierced top with a symmetrical, twisted pattern. The finial on the top is also twisted.

Eighteenth-century casters can broadly be divided into three categories: small casters for spices, ranging in height from eight to fourteen centimetres, the regular size sugar caster, around eighteen centimetres tall, and exceptionally large models like this one, which stands about twenty-four centimetres high. This last group is the rarest.

These large casters are an excellent example of the Dutch Rococo style. This new style seems to be a reaction to the strict, symmetrical Louis XIV style. Shapes become frivolous and must move, even shell motifs are given a completely asymmetrical form and are referred to as rocailles, from which this style takes its name Rococo. Due to the interest in nature, garden grottos were already constructed in the 16th century. These were decorated with shells, sponge and foam forms. However, it was not until 1730 that these shapes from the shell caves in Paris were applied as ornaments in art. In addition to floral motifs, they became an inspiration for Rococo fashion. From 1734, a flood of prints with rococo forms emerged, causing the new style to spread rapidly and eventually reach the Netherlands. Accounts and diaries show that French works of art were regularly ordered in the Netherlands in this new style.
(source Rococo in the Netherlands page 55 and 69).
In Dutch silver we see the first Rococo forms appear around 1745 after which it remained fashionable until about 1775.

Although sugar remained very expensive until well into the seventeenth century, the price of spices was many times higher still. People used smaller quantities of spices, so the casters that were made for them were much smaller than the sugar casters and had smaller openings in the tops. Before the sugar casters could be used, the coarse crystals of sugar candy had to be crushed in a mortar to create fine sugar that could be sprinkled on to food through the decorative piercing in the top.
We know from inventories that silver sugar and pepper casters were commissioned as early as the mid-seventeenth century. The model of the seventeenth-and early eighteenth-century caster was inspired by the English lighthouse caster, a simple plain cylindrical body with a pierced top.

In the eighteenth century casters always came in pairs, following the prevailing Louis XIV fashion which dictated that everything had to be strictly symmetrical. This extended beyond the design of objects and buildings to include table settings, which likewise had to be symmetrical. Candlesticks, casters and salts were consequently always made in pairs—a practice that continued in the style periods that followed.
Sugar casters were a permanent feature on Dutch dining tables in the eighteenth century. Whereas in neighbouring countries the sugar caster was replaced by a sugar bowl with a sugar sifter in the second half of that century, it was in precisely this period that the finest examples of casters were made in the Low Countries.

Wealthy, thriving Amsterdam was a magnet for silversmiths in the eighteenth century. Between 1760 and 1790 around ninety foreign smiths settled there, of which fifty-four came from Scandinavia, Austria, Germany, Eastern Friesland, Rhineland-Westphalia and the Baltics. These men came from the same background, practiced the same religion, their families intermarried and they worked with or for one another. The most important of this group was Johannes Schiotling. Born in 1730 in Gothenburg, Sweden, the son of Sven Schiotling, a smith in the artillery, and Kerstin Andersdotter, at the age of seventeen he was apprenticed to Olof Fernlöf, one of the most accomplished silversmiths in Gothenburg and the master of the guild numerous times. Six years later, in 1753, he made his journeyman’s test piece under Fernlöf. Its approval meant that he had completed his apprenticeship and, as an assistant, could begin his training to become a master silversmith.

During the next nine years Schiotling probably worked as an itinerant journeyman for different masters. In 1762 we find him in Amsterdam, where he purchased his burghership, registering as a silversmith.  Burghership was a prerequisite for admission to the guild as a master. In the same year, aged thirty-two, he was enrolled in the guild as a master.  He set himself up on Egelantiersgracht and a year later married Margaretha Sofia Jansen, who came from Eastern Friesland. Two of the bride’s brothers, Johan Diederik and Jan Arend, joined him, the former as a silversmith, the second as a burgher. Wilhelmus Angenendt from Wezel became a master silversmith in 1770 and joined the business, as did Christoffel Mittscherlich from Reval. The latter became Schiotling’s right-hand man. In 1788, on the occasion of the silver wedding anniversary of Johannes and his wife Margaretha, he made a portrait of the Schiotling couple which is now in the collection of the Amsterdam museum. Schiotling achieved great success and the range and quality of his output attest to his excellent relations with Amsterdam patricians. Important pieces by Schiotling are now part of museum collections including the Rijksmuseum and the Amsterdam Museum. Johannes Schiotling is the only silversmith to whom a special exhibition was dedicated at the Rijksmuseum in 1977.

Both casters are marked on the underside with the Amsterdam assay office mark, the Dutch lion, the date letter F for 1765 and the maker’s mark ISL of Johannes Schiotling. 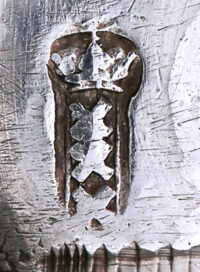 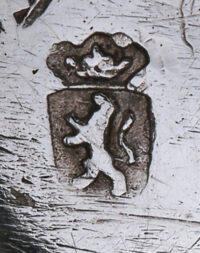 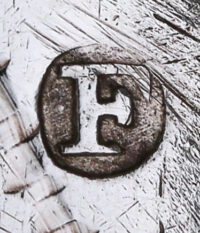 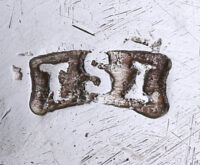